According to Jess Chappell from the RSPB’s nature policy team, these are the distinguishing features to look out for:- 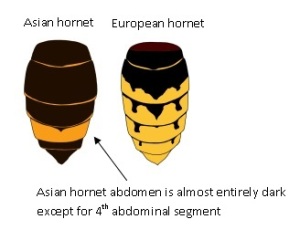 The invasive non-native Asian hornet is an aggressive predator of pollinating insects, including honeybees and wasps. It does not pose any greater risk to humans than our native hornets or bees but we are advised not to disturb a suspected nest . It was first found in France in 2004 and subsequently found in Jersey. It is now on the UK mainland and was first sighted in Gloucester and Somerset in September 2016: the latest sighting was in October 2019 in Dorset.

The UK government is keen to stop this non-native hornet becoming established in the UK. If established it could cause significant losses to bee colonies and potentially other native pollinating insects. We are asked to report any suspected sightings. New queens emerge from hibernation in February so this will be the time to be vigilant. The hornets are active from February to November.

Sightings should be reported to the Centre for Ecology and Hydrology at alertnonnative@ceh.ac.uk with location details and a photo if possible. Or fill out the report form on their website.

The NNSS ( the Non-native Species secretariat) has downloadable information sheets on their website www.nonnativespecies.org

The British Beekeepers Association also has information and an Asian Hornet incursion map on www.bbka.org.uk/asian-hornet-incursion-map

The State of Nature, a summary for Wales:-

“Changing agricultural management has had the biggest single impact upon nature in recent decades.

Our measure of species’ distribution, covering a broad range of plants, invertebrates and vertebrates, has declined since 1970, with more species decreasing than increasing. The rate of this change in nature appears to be increasing: our statistics indicate that over the last decade nearly half of the species for which we have data have shown strong changes in distribution.  8% of species in Wales are threatened with extinction.”

The charity Plantlife says “An astonishing number of wild plants grow on our road verges, some of which are threatened or near threatened.  Proper management of verges is critical if these species are to avoid extinction. Includes a list of known plants found on a road verge in the UK.”